Travel Homepage
Lodging
Traveling within Morocco can be quite the adventure, especially if you want to conserve your cash. Here are your transportation options and how they work. 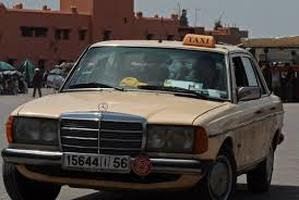 ​These are Mercedes cars used for regional travel between nearby cities or to set destinations within larger cities. They start from a taxi stand and end at another, although you can get out at any point along the route, or pick one up along the route if there is available space. Travel between the stands is at a government-regulated price per seat.

Six passengers ride within them: two in the front and four in the back with luggage in the trunk. Traveling between taxi stands is the usual mode of operation, but if you want the driver to take you a little further than the taxi stand, you will need to negotiate an additional price since they are essentially a private cab at that point.

Usually, drivers will wait until there is a full cab before departing, so you may wait for extra riders for extended periods of time. You pay for one seat (cheapest), or you can buy extra seats if you don't want to wait for additional passengers. You can even pay for the whole taxi.

​Because of the Moroccan culture, there are unwritten expectations of where women and men sit in relation to each other. If two women are in the car, they typically sit together in the front. If there is one woman, she will usually sit against a door. 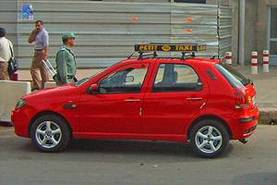 ​Only in larger cities, these are taxis like anywhere else in the world. There are four important things to note, however:

Premium Buses
​
CTM and Supratours are the two premium bus companies in Morocco. These intercity buses have their own bus stations and are more comfortable than regular souk buses (described below), in part because they are always heated or air-conditioned. They run to all of the big cities and tourist destinations. Supratours, as noted in the train section, is the same company as ONCF.

​Tickets for both companies these can be purchased in advance and online, unlike souk buses. Large luggage stored below is based on weight, but is generally 5-10 DH. CTM also ships luggage, sans rider, to all of their destinations for a fee.

Souk Buses
​
The souk bus is a term coined by PCVs at some point in the past for no known reason. What it refers to is any intercity bus that isn't run by CTM or Supratours.

More than anything else, except maybe grand taxis, souk buses are the most popular travel method among Moroccans. The quality of the buses are anyone's guess: some are nearly as good as CTM with air-conditioning while others keep the back hatch open to cool the engine. Often the buses are late, and sometimes they don't show up at all.

Walking into a bus station is often one of the most confusing and bewildering travel experiences in Morocco, particularly if you've never been to that station. Bus stations in Morocco operate like airports in America. There can be a dozen or more bus companies, all with their own windows. One company may have buses leaving at 8:00 am and 2:00 pm between two cities, while another one runs them at 10:00 am and 6:00 pm, and a third at still different times.

A group of men will usually greet you at the door, asking where you are going. Tell them! You will be directed to the correct window for the next bus to your destination. If you don't know the times of the buses going where you are going, virtually every person there has memorized the time of every bus leaving the station, whether for their company or not. If you are brought to one window, you may find you need to go to another in order to get the bus at the time you want.

Alternatively, skip the men at the door altogether and go directly to a window and ask for times. If your bus is leaving soon and you're in a bigger city, someone may walk you to your bus, often (but not always) expecting five dirhams for it. Extra luggage going underneath is normally five dirhams per item to the person that puts it there, but sometimes they will push you for ten.

Every city has either a proper station either on the edge of town or right in the middle, or, in the very small towns, just an office and one guy selling tickets. In these smaller towns, that one guy will sell the tickets for any bus coming through town, regardless of company. Souk bus tickets cannot be purchased online nor can they usually be bought days in advance. You will need to wait for the day before, a few hours before, or buy your ticket on the bus. 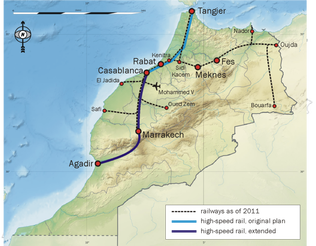 ​These is the most expensive form a travel, but is often the most comfortable and efficient, and certainly the easiest. They have 1st and 2nd Classes, with first being better air-conditioned in the summer. ONCF is the same company as Supratours, a premium bus company.

Note: Check the website for actual cities with either trains or Supratour buses. Cities with only buses are noted with "(Supra)" or "(Suprat.)" after their names. Neither trains nor Supratours actually run to Bouarfa, contrary to all of their maps. 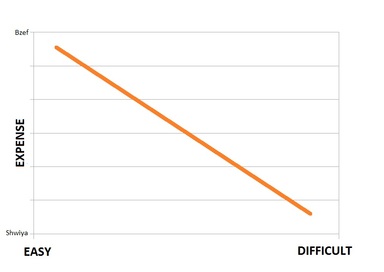 Quite often, there are two ways to get things done in Morocco: the cheap way and the easy way. The Casablanca Mohammed V International Airport is the easiest way to get in and out of Morocco from the United States, yet it's the most expensive. However, there are many airports in the country that have regular, discount airline flights to Europe, and getting to Europe from the States is consistently cheaper than getting to Morocco. Going to the regional airports might also be easier to get where you are ultimately going.

If you choose to fly into a Moroccan regional airport, you will need to buy two sets of round-trip tickets, one between Europe and the U.S., and a second between Europe and Morocco (discount airlines typically do not show up on travel websites). However, discount airlines in Europe, like EasyJet and RyanAir, often use a different airport than the major airlines coming from the States. Keep this in mind while booking, as you might need to travel between these two airports (e.g. major airlines from the U.S. fly into Frankfurt am Main, while RyanAir flies out of Frankfurt-Hahn).

​Click on the name of the city below to go to the Wikipedia page for the airport, which will tell you which airlines fly into it.

Note: Since some of the directions below include local buses or trams, some of the maps and schedules for a few large cities are in the City Buses & Trams section above. Also, grand taxis to/from airports usually must be bought in whole. You cannot buy just the number of places you need. Therefore, the price is the same, regardless if you are alone or with five other friends.