I'm going where?
Photo by Young Kwon
Morocco is divided by large mountain ranges, collectively known as the Atlas Mountains, running at a diagonal across Morocco. They are the reason for the relatively few roads in the belt between Essaouira and Agadir, Marrakesh and Ouarzazate, and Beni-Mellal and Errachidia (as can be seen on the map below). They extend from the Atlantic coast, going northeast, more or less until the border with Algeria. There is a separate offshoot extending north, running to the east of Fes up to Nador. The mountains are nearly as tall as any mountains in the contiguous U.S., and their rain shadow is at least partially responsible for the creation of the Sahara Desert.

​The Atlas Mountains, practically speaking, divide the country into two very distinct halves. The North is far greener, being the primary source of Morocco's agriculture. The South is, quite literally, the edge of the Sahara Desert, and produces little more than date palms and argan trees. Between the North and the South are a handful of sites located in the mountains themselves. 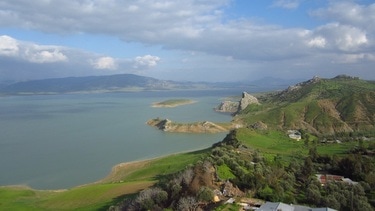 When the French occupied Morocco, they divided the country between "useful" and "un-useful" regions. The North, with the political (Rabat), cultural (Marrakesh), religious (Meknes/Fes), and commercial (Casablanca) centers, was in the former category. As a result, it's more developed, albeit unevenly. With the exception of Agadir going south, the North obviously has all of the beach towns, making for some of the most beautiful resort-looking sites. Generally speaking, the North has better and more roads; train service running from Marrakesh to Oujda, Tangier, and Nador; dar shababs with more amenities; more money; more western toilets; nicer hotels; and generally better opportunities and education for youth, in part as a result of their better universities. Given the above, every international airport but one is in the North, as are the plethora of major tourist attractions (in number of attractions, if not volume of tourists). On the downside, however, the PCVs note that the North has a lot more benign as well as serious harassment. All of these things are not necessarily true for all sites, however. Towns that you'd expect to have a lot of resources might actually have very little. Some dar shababs in the North, for example, have absolutely nothing in them for resources. 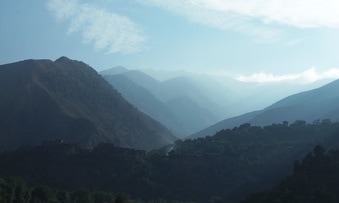 The environment and ecology of the mountains varies greatly, from relatively lush green landscapes to seemingly rocky wastelands. The commonality between them, however, is that they don't get the heat of the summer, but their winters can be quite trying. In fact, many towns do get snow during the winter, but unlike the rest of Morocco, homes will often have word-burning stoves in them to warm the house.

Some of the most remote regions of the mountains (for example Imilchil, which was the last city to be reached by paved road) are entirely Amazigh, rendering Darija virtually useless. 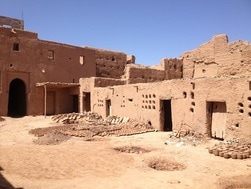 What the South may lack in material amenities it more than makes up for in its beauty and distinct culture. The South is traditionally and still to this day a strong Amazigh area of the country. Many buildings are made of mud and straw, there is often less infrastructure, but it's littered with oases that offer a beautifully stark contrast of desert and greenery. Picturesque and still-lived-in qsars (roughly translated as castles) are in most older towns, and nomadic herders of goats, sheep, and camels are spotted between towns. The South has fewer tourist destinations, less harassment, and most people wouldn't even think to try to rip you off. With a few exceptions, however, the South is also more conservative, where women are ill-advised to even show their collar bones in public. Although the vast majority of modern amenities like high-speed Internet and modern housing are nearly universally available, it has been said that the South offers an experience that is closer to what many view to be a "traditional" Peace Corps experience.

Although there are a lot of differences between the North and South, some of the biggest differences come in the contrast between large sites and small ones. Indeed, despite the obvious cultural and environmental differences between North and South, some of the challenges faced by smaller towns in the North are more similar to those faced in the South than they are to nearby big cities in the North. This is because the South, with few exceptions, are all relatively small towns. Defining what constitutes a large site versus a small site is also very difficult. In large part, it's relative to the towns nearby.

Large sites
Living in a large site provides more anonymity, which can be both good and bad. It's good, because you're just another face among many, so you might garner less attention. Moreover, fewer people will know where you live, which can be a good thing. On the other hand, because you will know less people proportionately, some people who have never met you might feel more emboldened to call out to you when you're passing. Also, large sites definitely have more amenities, like large supermarkets with nearly everything an American one would have, but it comes at the expense of a higher cost of living, making budgeting money much more difficult. Because of this, volunteer couples - or just two single PCVs who want to live together - are often sent to the larger cities so as to bring down their relative expenses.

Small sites
The smallest of sites often don't even have weekly markets, which is normally a staple of Moroccan life. As a result, PCVs in these sites do have to travel for fresh produce and house furnishings. However, the nearest sites with them are usually only thirty minutes away or less, making the inconvenience not overwhelming. There are many benefits to smaller sites, however. First, integration can be more easily achieved. You will become more of the community at large, rather than just a face, potentially providing you with invaluable "inside" perspectives of Moroccan culture otherwise difficult to observe. Additionally, because of the above, harassment is greatly minimized, since most people will know you, or know someone who does.

The main two differences between large and small sites, as they pertain to work, is money and associations. The larger sites generally have more money, resulting in nicer and bigger dar shababs, with computer labs, soccer and basketball courts, music rooms, and the like. They also have more active associations, meaning the dar shababs have more activities going on, and partnering with them to do work might make work easier. Both of these trends are certainly not universal, though, as some of the relatively smaller sites do, in fact, have both money, associations, and active dar shababs. Likewise, some large and developed cities might have neither at their dar shabab. The bottom line is: you never know what you'll get until you get there, which is definitely part of the adventure of being a Peace Corps Volunteer in Morocco.